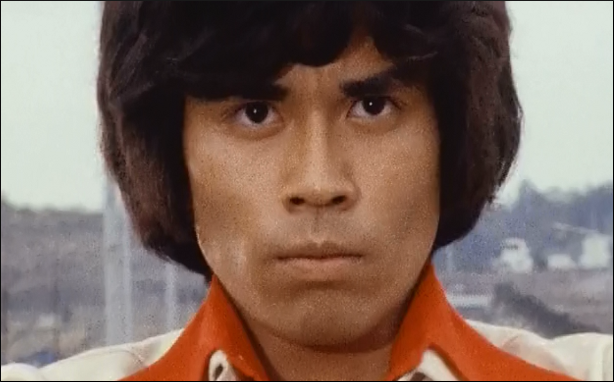 Anybody wanna play “Spot The Recycled Footage From The First Episode”? 😛 This release has been a long time coming to say the least, and we all hope you think it was worth the wait. ‘Cause, yeah, this is a pretty good one. You’ll laugh, you’ll cry! All that jazz! We also get the dastardly Kenji Ushio and his amazing evil laugh as today’s CRIME Boss (more on him below). Anddd… Well, apparently Daichi is easily persuaded with food! Shame on you, Daichi!

While I’m saddened to report that he passed away back in 1993, he’s played a variety of roles and fans of the genre are bound to recognize them. I believe he’s best known for his performance as Ambassador Hell (Kamen Rider ’71), but he was also Saburoube Fukuro (Thunder-Stealth Captor 1 – Ninja Captor) as well as Doctor Q (Kyoudai Ken Bycrosser).

Frank – From this release onward, our new friend here will be helping out with translation checking! You’re the man!
Nanto – For making us an .MP4! Whoo, this was a total act of kindness out of nowhere but it really helps! Thanks so much!

ADDITIONAL NOTES
– The card game in the episode title [0:03:12.61] is “Snap”, which you can read more about here.
– We localized this, but the actual Japanese saying at [0:06:52.95] is literally (in Sky’s words) “Separate and search every root of the grass”.
– Kibidango [0:13:53.98] would translate into “millet dumplings”.
– [0:20:39.25] translates literally into “You’re still alive?!”, but as you watch you’ll notice that it actually makes zero sense in context. Simply said, nobody in JAKQ was thought to have died. The scuffle between Devil Wrestler and Ace earlier in the episode is moot because the bad guys clearly saw him get away, not to mention that they had another encounter right before this line was said so… We chalked it up to bad writing or a mistake in production, and took a liberty with how we handled this line.